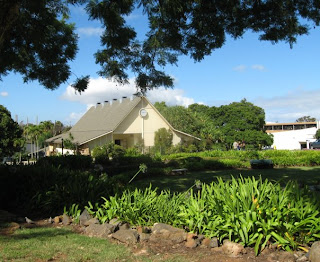 Our library is a warm and fuzzy place in an idyllic setting. It's also a place where exploring new ways to infuse technology into the curriculum is encouraged and celebrated.
This news story tells is like it is -- libraries are keeping up with the times, and should always be part of the mix. The desirable bottom line? Access to information for all.


Libraries launch apps to sync with iPod generation
By JEANNIE NUSS (AP) – 1 day ago
GRANDVIEW HEIGHTS, Ohio — Libraries are tweeting, texting and launching smart-phone apps as they try to keep up with the biblio-techs — a computer-savvy class of people who consider card catalogs as vintage as typewriters. And they seem to be pulling it off.
Since libraries started rebranding themselves for the iPod generation, thousands of music geeks have downloaded free songs from library websites. And with many more bookworms waiting months to check out wireless reading devices, libraries are shrugging off the notion that the Internet shelved them alongside dusty books.
"People tend to have this antiquated version of libraries, like there's not much more inside than books and microfiche," says Hiller Goodspeed, a 22-year-old graphic designer in Orlando, Fla., who uses the Orange County Library System's iPhone app to discover foreign films.
The latest national data from the American Library Association shows that library visits and circulation climbed nearly 20 percent from 1999 to 2008.
Since then, experts say technology has continued to drive in-person visits, circulation and usage.
"It also brings people back to the library that might have left thinking that the library wasn't relevant for them," says Chris Tonjes, the information technology director at the public library in Washington, D.C.
Public library systems have provided free Internet access and lent movies and music for years. They have a good track record of syncing up with past technological advances, from vinyl to VHS.
"They've always had competition," says Roger Levien, a strategy consultant in Stamford, Conn., who also serves as an American Library Association fellow. "Bookstores have existed in the past. I'm sure they will find ways to adapt."
Now, the digital sphere is expanding: 82 percent of the nation's more than 16,000 public libraries have Wi-Fi — up from 37 percent four years ago, according to the American Library Association.
Since the recession hit, more people are turning to libraries to surf the Web and try out digital gadgets.
In Princeton, N.J., 44 people are waiting to borrow Kindles.
Roya Karimian, 32, flipped through the preloaded e-pages of "Little Women" after two months on the waiting list.
"I had already read it, but I wanted to experience reading it on the Kindle," Karimian says.
A growing number of libraries are launching mobile websites and smart-phone applications, says Jason Griffey, author of "Mobile Technology and Libraries." No one keeps tabs of exactly how many, but a recent iPhone app search showed more than a dozen public libraries.
The Grandview Heights Public Library in suburban Columbus, Ohio, spent $4,500 — a third of what the library spent on CDs — to give patrons access to songs by artists from Beyonce to Merle Haggard using a music-downloading service called Freegal.
Online services point to technology as a cheaper means to boost circulation.
The Cuyahoga County Public Library near Cleveland laid off 41 employees and cut back on hours after its budget shrank by $10 million. But it still maintains a Twitter account and texts patrons when items are about to become overdue.
As more libraries log on to social media, their lexicon is changing, replacing "Shh!" with "LOL." In Florida, the Orange County library's Twitter feed sounds more like a frat boy than a librarian: "There's more to OCLS than just being really, really ridiculously good looking. We created an App!"
Crops of social networking sites are popping up specifically for bookworms — electronic or otherwise — and library junkies.
Jennifer Reeder, a 35-year-old mother of two in suburban Phoenix, tracks her reading stats onGoodreads.com: 12,431 pages so far this year — most of them in library books.
"When I was growing up, I always felt like a library was where I was supposed to go and like do homework," Reeder says.
Now, it's where she checks out audio books for her kids' iPods and sates her addiction to iTunes with free downloads of songs by Pink and the cast of "Glee."
Even the brick-and-mortar buildings are evolving, as libraries cater to a generation with smart phones stapled to their hands and music plugged into their ears.
Sleek study areas give off a coffee-shop vibe, while silence seekers are relegated to nooks. Self-checkout stations feel more like supermarkets, with patrons ringing up books and DVDs instead of boxes of cereal.
Libraries are designing new branches as hybrid technology centers — dedicating more space to computer labs and meeting rooms.
The Central Library in Seattle houses some 400 public computers — some of them clustered in rows with cafeteria-chic chairs, compared with 75 computers in the old building. The building opened in 2004 and looks more like Frank Gehry's Guggenheim Museum in Bilbao, Spain, than the imposing stone or brick building that's come to symbolize a library.
"The traditional function of a library, of being a place where people can come to get information, to learn, to relax, to kind of lose themselves in books, is going to continue," says Tonjes, of the D.C. Public Library. "It's just not going to be constrained by physical boundaries."
___
Online:
http://twitter.com/oclslibrary
http://www.goodreads.com/
http://www.ala.org/
Copyright © 2010 The Associated Press. All rights reserved.