2 Unconferences in 2 Days: EdCamp Honolulu and EdCampOnline -- Part 1 of 2

I hadn't ever been to an EdCamp before, so to attend two in two days was quite amazing.

One event was in person, the other was online (a first not only for me, but for edcamps!).

I thought about combining the two in one post ... Too much!

So this is Part I: mainly about the resources I gathered at EdCamp Honolulu, October 19, 2013.

Part II will be about EdCamp Online.

What is an EdCamp?

Also known as "unconferences", EdCamps have been springing up across the country. The first one was in 2010 in Philadelphia.

I like EdCamp Honolulu's definition, which is clear and concise:

EdCamps are "UNconferences," that are free, participant-driven professional development events where the attendees set the schedule and lead the sessions, which are conversations - NOT presentations.


Participants choose what they want to talk about, on the spot. 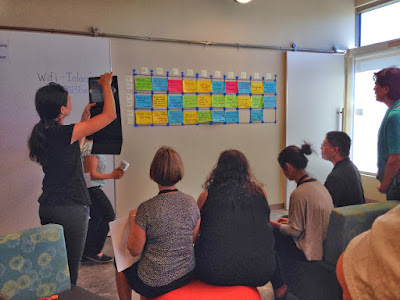 There were three sessions at EdCamp Honolulu.

1.  "Fair Use Images (Intellectual Property)" was the group I chose to join in the first session. The discussion was thoughtful and these notable links were mentioned.


2. I picked "How do I publish student work for a meaningful global audience experience?" for the second session.  Catherine Ball of Mid-Pacific Institute suggested the topic.

Lots of ideas and discussion! These links were mentioned:

led to our first Student International Hangout at our school, thanks to the follow-up interest of one of our students, +Jasmine Doan.

3. My teacher-librarian friend +Anne Torige wanted to know how to dress up her Google site, so I suggested we form a "Google Sites Tech Help"group, and I offered to facilitate the discussion.

Imagine my surprise when I glanced over to see the start of John Trowbridge's site that he made as I was talking.

• The place was ABUZZ with activity! Lots of Hawaii educators. Excited!

• There were a few people from other states there too. +Suzanne Baraff (Calvary Christian School, Pacific Palisades, CA) and I hit it off right away, and she ended up visiting my school the next week! 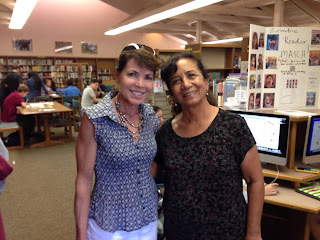 • The white board of Twitter handles (great idea for connecting, +Melvina Kurashige!) 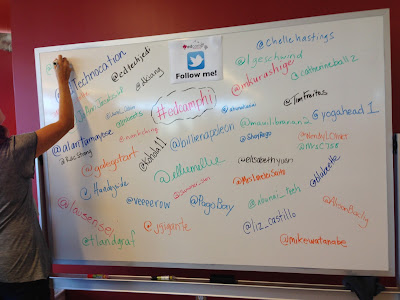 gave me the idea to create a Twitter list, for us to keep learning from each other.

• Iolani's Sullivan Center was the perfect venue for EdCamp Honolulu, with large open spaces and everything on wheels. And what a beautiful setting, with Diamond Head in the background.

MAHALO to the EdCamp Honolulu team, +Josh Reppun, +Ellen Cordeiro, +Liz Castillo, +JoAnn Jacobs, +Melvina Kurashige, +Michael Fricano II, +Patti Nagami, and +Jackie Okumura, for their tireless work to set up this energizing event! It ran so smoothly and I learned a lot!