3 More Things to Share about our Hour of Code Week -- A Project, a Challenge, and a Presentation

I have three more things to share about our grassroots Hour of Code Week at our school.

1. A project. Mr. Van Amburgh's Stagecraft class did a full-on coding project this week. Here are comments made by some of the students about the tutorials:

"The app that I played was the angry birds one, Due to the blocks, the game was simple and fun. Although coding might not be as simple and fun, trying it for the first time in a way like that is very good for a beginner, such as myself. I had so much fun I played multiple rounds on the angry birds app, and even tried a couple others, like coding combat, coding combat was more fun probably because it was easier to just type in what you wanted your character to do. I also played Isaiah's game, Ping Pong madness, the game was simple and fun, and for his first time ever making a game, I give him a 5 out of 5 stars. (Right now I am the current record holder with 55 bounces without drops.)" -- Ethan

"The app I tried was called touch develop. Its system was basic and easy enough to follow, even for someone abhorrently bad with technology like myself. It taught me about java script programming by having me make a little animation. The app was informative but not very interesting. I would have liked it better if there had been more of a focus on problem solving instead of procedures that had to be followed to the dot. Because programming is a science that requires exact calibration, I have never been that interested in it. If there more freedom for variation it mite be more appealing to me." -- Ari

"Using the angry birds and bad pig tutorial, I was able to code the program so that the bird would quickly find the pig. It was extremely simple thanks to the blocks, but I had to watch the video in order to figure it out. Having never done any coding this was all very new to me. Although the beginner tutorial was easy and fun, I can definitely see how complex this process can become when I look at the actual code. It reminded me of the block puzzle I used to play on my iPod, where you have to get the red block pass the other blocks that can only move in one plane. The problem solving element is the basis of both and keeps me guessing how to make the solution the shortest." -- Sarah

"I experimented with scratch. It was pretty fun, with many interesting things, like the box style. It simulated programming with scripts, but much simpler. The only thing I did not like about it was that it was very hard to do simple things, like make the screen scroll with the character. It also took a lot of experimenting for the use of variables, which was pretty fun yet challenging to figure out." -- Noah

I really liked the program I used. I picked the game called Code Combat, which is basically like a medieval RPG where you go through each level trying to collect gems and even get to fight monsters. I liked it so much that I actually made a free account so that I could save my progress! It was surprisingly easy to do coding, all you have to do is type commands for your character to do on the sidebar and then click "run" for the character to do them. It's a really cool and fun way to learn the basics of coding. -- Jessica

"I liked the tutorial, and it was really fun to try. I've tried to do coding before, but it always failed. The blocks definitely make it easier to program a game/movement/action; they were less confusing, since they weren't made up of numbers, letters, and punctuation symbols I didn't understand. Although some parts were a bit odd, it got less confusing after a few tries. :)" -- Lauren

"I had fun with the tutorial of the program. Then I made a ping pong game by myself and it actually turned out ok. The process is difficult but if you do it enough it becomes habit. I would recommend trying multiple game styles to learn how to make a game. I want all of you to try my game out but I don't know how you can find it." -- Isaiah

2. A Challenge. Jesse Doan of the AP Computer Programming Class issued a challenge to all Seabury students to break his Cooney code: 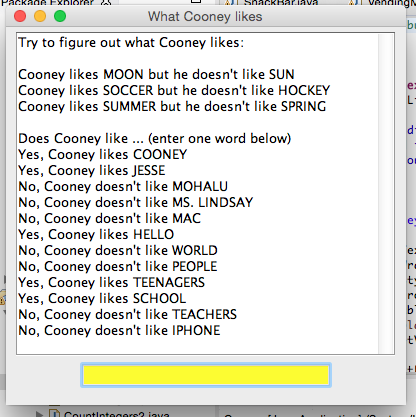 Can you figure out "What Cooney Likes"? :)

3. A Presentation. Our week ended with a last-minute, very informative lunchtime presentation by some of our AP Computer Programming students.

Not a bad turnout considering the late notice and the competition (Cooking decorating and Christmas caroling in the dining hall. :D )

Computer teacher Mrs. Hodara is hoping that some of the attendees will sign up for AP Computer Programming class next year!

P. S. The winners of the Hour of Code participation drawing ....? 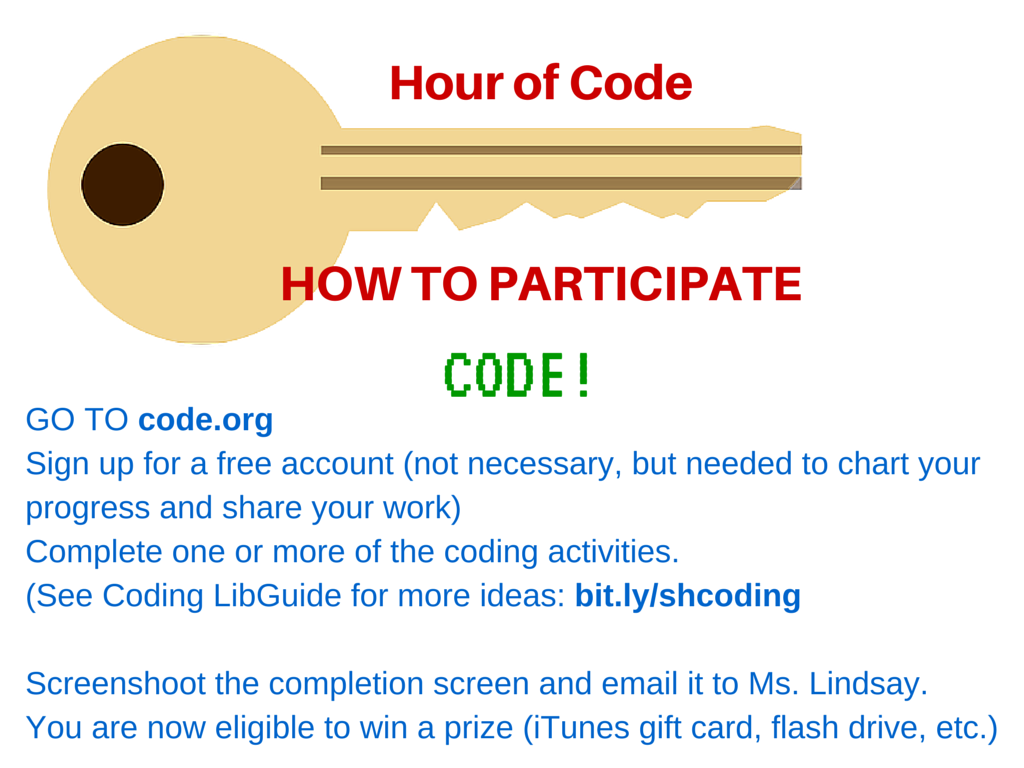 ... will be announced tomorrow in school.

Thanks to everyone who participated in the Hour of Code this year! We will plan earlier next year, for an even better celebration.